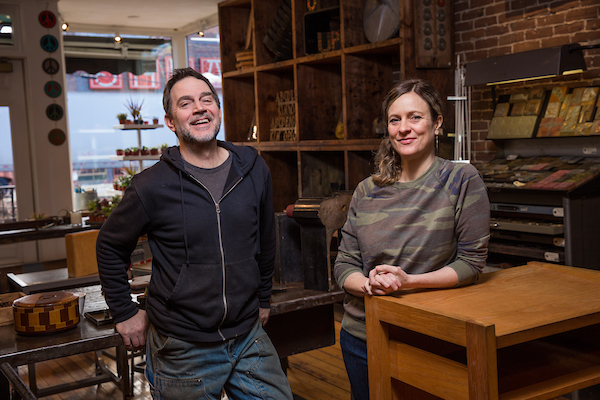 TURNERS FALLS—John D. McNamara has spent years hunting for treasure, and when asked what his favorite find has been, he smiles. It’s not an interesting industrial steel mold or a well-worn workbench or even drawings of silverware from the former Lunt Silversmiths.

She blushes, and they laugh, the comfortable laugh shared between people who enjoy each other’s company and know each other well.

But if pressed for a favorite “thing,” he has found for Loot Found + Made, the business they run in Turners Falls, McNamara gives the nod to eye glass and fork and spoon super-sized steel or epoxy dies. “They are super decorative,” he says of the finds from about a dozen years ago.

The lives of McNamara, a native of Athol, and MacLean, from Ashburnham, came together in Fitchburg, and they wanted to find a place that was theirs.

One day they were driving through Turners Falls, the largest of the villages of the Town of Montague, and he recalled stopping at the light on the corner of Third Street and Avenue A in the 1970s when he was going somewhere with his mother, Sylvine McNamara, who was driving a ’68 Volkswagen Beetle. He saw the colorful mural then painted on the side of the Colle Opera house, “and I thought, What?” he recalls.

He shared that memory with MacLean, who immediately liked Turners Falls because it reminded her of Brooklyn with its brick buildings and tree-lined streets. “Erin thought it was charming, walkable,” and it is surrounded by the Connecticut River, McNamara says. 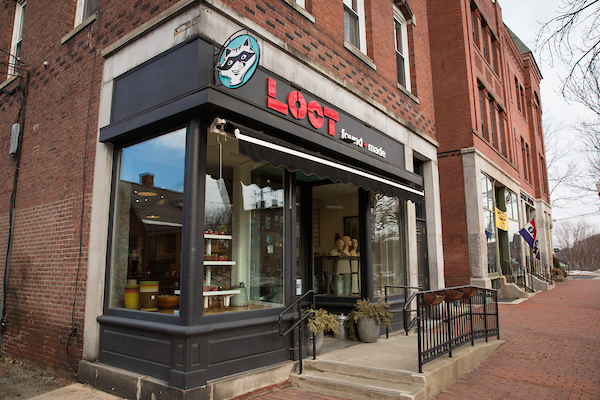 For the couple, the natural beauty of the area collided with its industrial and historic heritage, creating a vibe they wanted to be part of.

In 2007 they bought a brick building on the village’s main street, Avenue A, and remodeled what had been a cone shop, then a dentist’s office, and most recently a dog-grooming parlor into Loot. They moved into one of the three apartments above the 1,500-square-foot store in 2008; they still live there.

McNamara credits his mother with his interest in antiques: “She was the antique lady in Athol. She did this as a fun hobby.”

But he and MacLean have turned it into a successful business.

As they spoke to a visitor at a large wooden table in the back room separated from the retail space by century-old swinging wood and glass doors, she got up to refill his coffee and hers, and Mini, one of their three rescue cats, jumped up for attention. (They have fostered some 20 cats through the local animal shelter.)

McNamara and MacLean — who also own another mixed-use building a few doors down on the avenue — agree that the community and their customers keep them in Turners Falls. “We feel like we have been really supported” both by town officials and repeat customers who come from as near as down the street to as far away as Boston and New York. “I like to say this is a ‘yes’ town for business,” McNamara says. 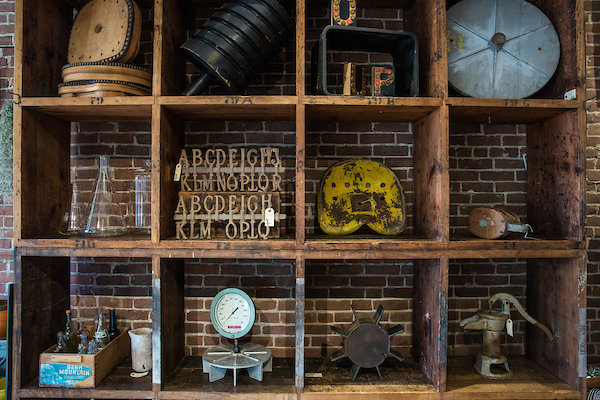 He generally finds items for the store, sometimes cultivating a relationship with a seller that takes years to produce a purchase. MacLean takes charge of merchandizing, displays and general store operation. “There are so many things you’re doing all the time. It’s creative in its own way,” she says. “We are not a dusty antique shop.”

Indeed, displays change frequently, and merchandise is clean and well placed. She has an artist’s eye, being a graduate of Syracuse University with a bachelor’s degree in fine arts in painting.

McNamara has a bachelor’s degree in video and television production from Fitchburg State College and has had the opportunity to be in front of the camera several times as one of the Brimfield Antique Flea Markets vendors on the television show “Flea Market Flip.” 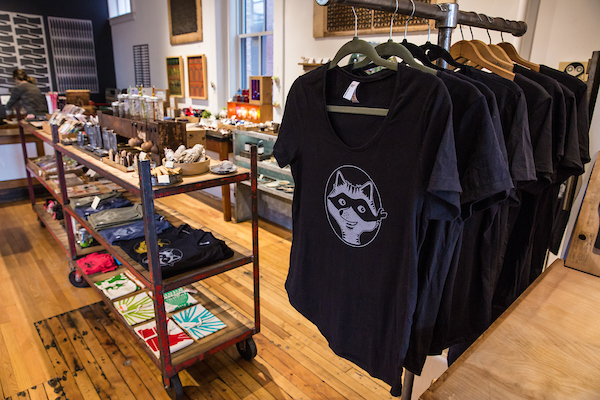 When not working at Loot, the couple can be found hiking or patronizing local businesses like Brick and Feather Brewery, Five-Eyed Fox restaurant and The Rendezvous pub. In fact, it was the latter establishment that helped draw the couple to Turners Falls.

“I liked the graphic design, craft night and music,” MacLean said. “It offered us a place to meet people that we are still friends with.”

She and McNamara are energized by new businesses in the village and are good neighbor businesses; it’s not unusual to see MacLean raking or sweeping in front of one of the couple’s buildings.

Living a sort of retro life is pleasing to her. “With the way the world is changing with people buying more online, there’s a disconnect,” she said. “What we do here is old fashioned. We like people to feel like they are coming into a home and talking to someone, hearing a story, touching something. That motivates and keeps me going. Maybe it has a ripple effect.”

If you go, check out more about Franklin County here.